A soldier stationed in Kansas saved ‘countless lives’ on Wednesday morning when he hit a wannabe mass shooter with his car as the man was firing randomly at people on a bridge near an Army base, a police chief said.

One person was injured by the shooter, according to Leavenworth police Chief Patrick Kitchens. That person, also a soldier, was a random victim, Kitchens said.

Officers initially believed they were responding to a road rage incident on the Centennial Bridge that connects Kansas and Missouri, not far from Fort Leavenworth, the police chief said.

Instead, they discovered that a man had been using multiple weapons to fire randomly at vehicles. The suspect was trapped under a car, Kitchens said. 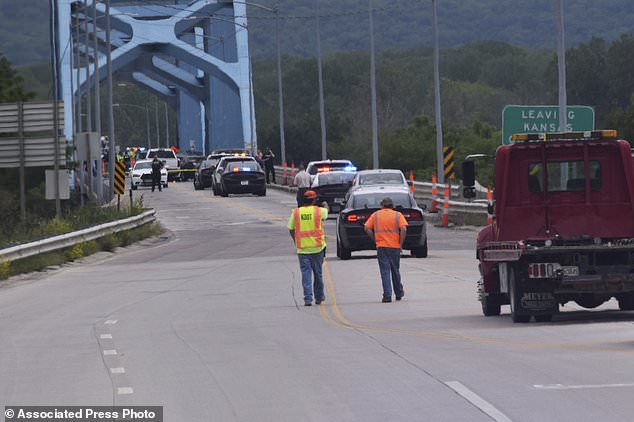 The 34-year-old soldier who ran over the gunman had been waiting in traffic when he saw what was happening, according to Kitchens.

‘The soldier intervened by striking the shooter with his vehicle, causing him to be critically injured, but ending the encounter with the active shooter and likely saving countless lives,’ the police chief said.

‘There doesn’t appear to be a target,’ he added. ‘The person was simply, randomly firing at vehicles as they passed by.’

The shooter, described as a 37-year-old resident of Platte County, Missouri, drove to the bridge at around 11 a.m., parked his car, and started to shoot at random cars crossing the bridge, according to a news report by KMBC news.

The suspect had a semi-automatic rifle and a handgun, shooting three different vehicles during his attempted attack, with at least seven bullets flying through the window of a Ford Taurus.

Aerial footage of the bridge after the incident showed vehicles involved in the attack and police officers and their vehicles working on the bridge, which had been closed and taped off to the public.

April Steinke, who had been at the nearby Nextcare Urgent Care when the incident happened, said: ‘Me and another patient just heard some sirens and I was like, “Wow. That’s awful close,” adding that she was impressed with the soldier’s quick thinking. ‘That’s a hero to me,’ she said of the soldier.

Both the shooting victim and the suspect were in serious but stable conditions in a nearby Kansas City hospitals, police said.

Kitchens said no motive for the shooting has been determined, but investigators are looking into the suspects history. The suspect is from Platte County, Missouri.

The guns are reportedly being traced by the Bureau of Alcohol, Tobacco, Firearms and Explosives to check whether they had been purchased legally.

One lane on the bridge was reportedly already closed for road work before the shooting occurred, and was closed for five hours by police officers as they investigated the scene.